New inclusion to the stable 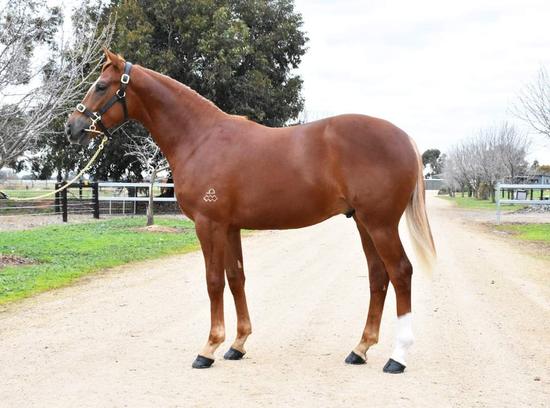 What a legacy it is that has been left by Japan’s superstar stallion Sunday Silence - the Kentucky Derby hero breaking all records enroute to becoming Champion Stallion on a remarkable 13 occasions.

The sire of 171 stakes winners, Sunday Silence made his best mark on the breed via his champion son Deep Impact, winner of 12 of his 14 starts - seven of those in Group One company.

Winner of the Champion Sire title on seven consecutive occasions, sadly passing away whilst still at his peak, Deep Impact has been well represented by 155 stakes winners, 47 of whom have been successful at Group One level - including the wonderful galloper Mikki Isle, sire of this exciting colt.

An eight times winner from 20 starts, Mikki Isle was second at debut - winning his next five races (including two Gr.3 races) culminating in Gr.1 success in the Mile Cup at Fuchu. He would add another elite level win to his resume when taking out the Gr.1 Mile Championship at Kyoto at his penultimate start.

Retiring to stud as the winner of over $6 million, the high class sprinter/miler has his first crop of youngsters racing in Japan and has already had a winner and several placegetters - with the best still to come!

Speaking of Group One mares, the mother of this handsome colt is one - the terrific chestnut Vitesse Dane.

The winner of five races and over $527,000 in stakes, Vitesse Dane won two races at two and was back bigger and stronger at three, proving herself to be one of the country’s best at that age with a dominant Gr.1 Queensland Oaks victory - backing up a week later to finish a gutsy third against the boys in the Gr.1 Queensland Derby.

Already the dam of two winners with her two-year-old being a ¾ sister (in the Paul Messara stable, raced by Arrowfield) to this colt, Vitesse Dane hails from a consistent family being one of the eight winners (from ten living foals) for her city placed dam Riverbed.

Also dam of the stakes placed multiple city winner Hudson River (a full brother to Vitesse Dane), Riverbed is out of the Irish River mare River Of Hope who produced six winners from seven to race. Her dam Bonnie Hope by the legendary Nijinsky II also boasted a great strike rate with seven of her nine foals to race being winners including the dams of three stakes winners.

Vitesse Dane’s dam sire is one of the great Danehill’s best sons in Danewin, five times Gr.1 winning grandson of the famed matriarch Eight Carat. A high class stallion despite fertility issues, he sired 30 stakes winners whilst his daughters have produced a further 13 stakes winners including the Gr.1 gallopers Fawkner and Gold Trail.

What an interesting pedigree this fellow has, bringing together the multiple Gr.1 winning close relations Rock Of Gibraltar and Riverman - providing for a lovely 6 X 6 cross of outstanding broodmare River Lady. This is a cross that has produced 24 stakes winners… and what great names he has close up, the likes of Deep Impact, Sunday Silence, Halo, Danehill, Nureyev, Blushing Groom, Irish River, Nijinsky II and Sir Gaylord - all class!