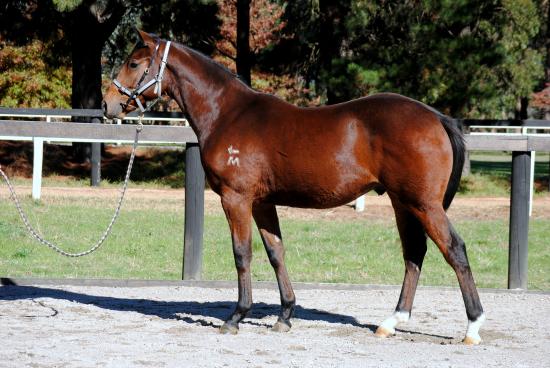 Please PM or call 0417696678 to discuss your interest in ownership. Limited opportunities available.

A horse who really knew how to find the line, the regally bred Kaphero - son of Golden Slipper winner Danzero and Group One mare Kapchat - won ten of his 31 starts, amassing over $800,000 in stakes.

A particuarly fast horse, Kaphero was a Listed winner of a Blue Diamond Preview at debut, a couple of starts later winning the Adelaide Magic Millions by four lengths.

In four again as a four-year-old, he won another seven races (all at metropolitan level) including five in a row culminating in the Group Three McEwen Stakes at Moonee Valley.

At stud siring 75 winners from 133 runners, Kaphero has never been an expensive stallion but he is performing well with the average earnings of his starters being just under $35,000.

This colt is the fourth foal produced by the two times winning Black Hawk (Group One winner in Japan) mare Wingasinga whose first to race is the stable's talented miler Figlio - a consistent two times winner rarely far away from the action.

The dam of Miss Lazarus is Winning Hit, dam of four winners (from as many to race) including the durable dual stakes winner Forehand and the dams of the stakes winners Elliotto, Kenconcarne and Ready To Rip.

A half-sister to the Group One winner Euphoria and two other stakes winners, Winning Hit is a granddaughter of one of the great mares of the Australian turf, the multiple Group One winner Denise's Joy who has established an enduring dynasty, her descendants including the big race winners Tuesday Joy, Sunday Joy, Joie de Grise, Arlington Road, Miss Danehill, Fenway and More Joyous.

Bred on a 5 X 4 cross of Northern Dancer (plus an extra strain of his dam Natalma, also third dam of Danehill) via two of his finest sons Danzig and Nureyev, this colt carries background duplications of the fine mares Sweet Lavender, Lavendula II, Selene, Commotion, Mumtaz Mahal, Queen Mary and Sister Sarah.